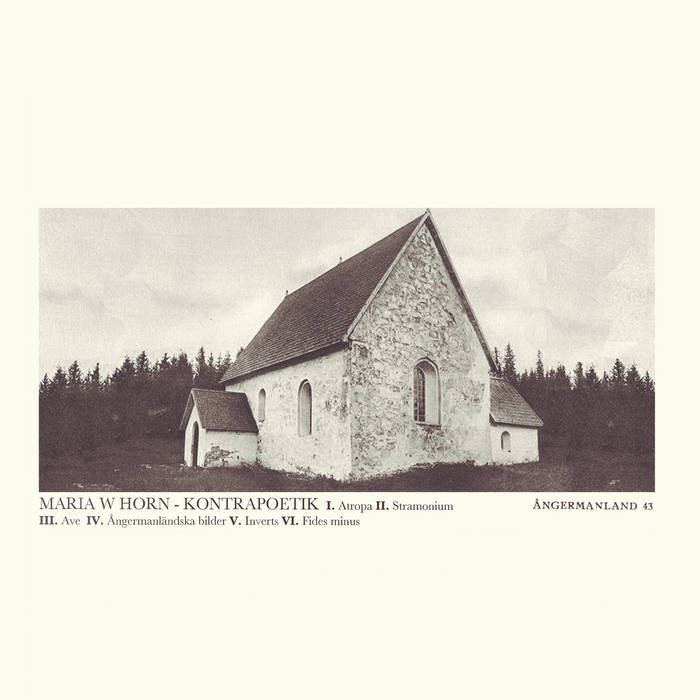 C://FNFN one of the most beautiful pieces I've ever heard, truly Favorite track: Ave.

Kontrapoetik is a very personal and simultaneously historical investigation, tackling the deceivingly serene, yet turmoiled past of composer Maria W Horn’s home region Ångermanland in the North of Sweden, and her own counter-exorcism project thereof. Drawing from archival material in the region she taps directly into the conflict of this bastion for the worker’s movement with the Swedish military in the 1930’s that left 5 dead and nearly triggered a revolution. Even before that it was the site of Sweden's largest documented execution of women accused of witchcraft in 1674 in the form of burnings and decapitations. Constituting two thirds of Sweden's total area, Norrland is sometimes referred to as "the colonies" because of the uneven distribution of the wealth generated by the natural resources of northern Sweden, a small portion of which is reinvested in the area. Since the 1970's it has seen increasing depopulation and disintegration of the welfare state. The piece Ångermanländska bilder is based on material from a collection of Super-8 films that depicts the environment of Ångermanland from 1930-1940; the manor houses of the rural community, the steamboats transporting timber along the river that runs through the landscape, the power plants and sawmills.

Concurrent with Horn’s Ångermanland research, she was part of an artistic research project in the form of a satanic feminist sect. The goal of the work within the sect was to develop a practice consisting of ceremonies and rituals based on counter readings of the Christian genesis narratives, dismantling its misogynist traditions. In these counter-myths, Lucifer is re-conceptualized as a feminist liberator of womankind, and is seen as an ally in the struggle against a patriarchy supported by God the father and the male priesthood. The ingestion of the forbidden fruit by Eve becomes a heroic act of rebellion against the tyranny of God and Adam. Several of the pieces on Kontrapoetik were composed specifically for ceremonial practices, as in the case of Ave, which is a composition built from a text by Michelle Jangmyr, one of the sect members.

Field recordings sourced from the archives of The Härnösand Art Museum thread through magnetic tape, formating stark portraits of Horn’s attested narrative. Harmonic inspiration is drawn from ancient Swedish pastoral music, minor scales and free contrapuntal progressions. The record “Locklåtar Och Musik På Horn Och Pipa”, along with a collection of recordings released by the Swedish radio in 1966, was uncovered from the archive and sampled, re-synthesised, and reinterpreted. The fusion of these sonic documents with the mellotron, church organ and Buchla 200 synthesiser creates an immersive music that welcomes other forms of listening, unhinged from the cerebral and guided by intuition.

The musical territories explored by Horn on Kontrapoetik are vast, but at the heart of each piece is a strong fundament of reductionist technique no matter how maximal the results may sound. Deceptively simple harmonic progressions are refractured through the means of inversion and repetition, presented either in a pure state or being crushed and deformed by layers of distortion. Coupled with this is an almost tactile relationship to texture as well as an immaculate sense of the physicality of sound. This work, while saturated by an almost overbearing sense of longing and loss, never gives in, but stands steadfastly defiant.