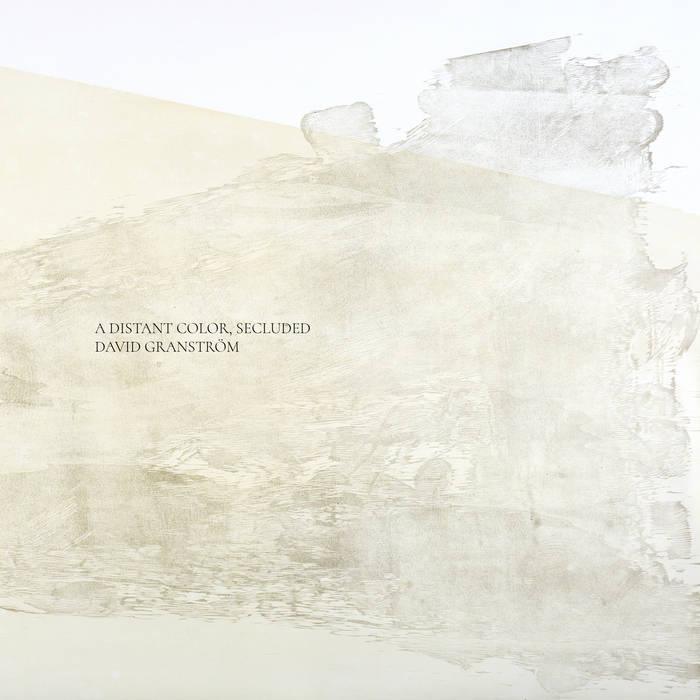 Stockholm-based label XKatedral proudly presents the first full-length release of the work of Swedish composer and sound artist David Granström. In four interrelated pieces, Granström’s new collection of sound work – A distant color, secluded – invites us to take part in the creation and destruction of perceptual worlds; worlds whose interiors are at once manifestations of vast topological complexity, and of minimalist, pure non-dimensionality.

Upon entering the modalities of Granström’s A distant color, secluded, chordal identities emerge, blend and dissolve in cyclicly repeating patterns of activity. As if continuously traversing an ever-expanding field of materialized harmonicity, this collection of sustained sound skillfully explores the formation of sensory withins and withouts, gradually guiding the listener toward a state of complete immersion.

From the point of view of method, Granström proceeds algorithmically when structuring these sounds, both on a level encompassing intricate precision control over the timbral quality and exact tuning of individual tones, and on the level of larger-scale formative patterning. Employing the medieval principles of isometricity and just intonation, Cagean aleatorics, and advanced real-time sound synthesis, Granström gives rise to a rare form of stability, a sense of multifaceted uniformity, in harmony and in structure. Although technically rigorous, this work is by no means a mere demonstration of technical mastery. Rather, the sound of this music is as direct as space itself; a sounding display of synthesized gravitational light.
Symmetrically reoccurring harmonic enclosures – as if repeatedly expressing the sonic laws governing the currently manifesting world, the patterned resonance of Granström’s work functions syntactically to reflexively establish its own form.

Beneath this apparent rule-boundedness, however, rests the implicit, and arguably primary force of Granström’s minimalist project: this modal structurality, and ultimately the entire work itself, is only here to support its own dissolution; a dissolution embodied by the shift from conventionally engaging in the act of listening-to to the complete abiding in the state of listening-with; a dissolution into intensity itself.

David Granström (b. 1987) is a composer and sound artist based in Stockholm, Sweden. His sound work is characterized by harmonic simplicity and spatiotextural complexity, employing sounds of
both synthetic and acoustic origin. In 2014, he received a Master’s degree in Composition of Electronic Music from the Royal College of Music in Stockholm and has, since then, worked as a teacher of composition, sound synthesis and advanced spatialization, in part at the Electronic Music Studio (EMS) in Stockholm. Part of Granström’s practice consists in researching new methods for working algorithmically with real-time sound synthesis and precision-tuned harmony, a work which is technically realized by employing tools that he himself develops in the SuperCollider programming environment.